The Pentagon AATIP Connection:
In a previous article, I'd written on the Advanced Aerospace Threat and Identification Program (AATIP) and had raised several points about the scientific papers that were contracted out by The Pentagon. These papers cover many areas where The Pentagon had work performed by external scientists. AATIP was set up with the purpose to research unidentified aerial objects (UFOs) and determine their function, source, and potential threat.

The contracted reports document the hypothesised functionality of the objects and their relating materials, method of flight, and just about everything in-between. Unless of course, they had access to physical material from the objects, in which case the functionality would be derived observations of various elements of the material make-up of the craft/objects under study. Since the scientists were external to The Pentagon we can only assume that they did not have access to any relating material and would have likely been blinded to pre-existing classified projects. Unless some of the scientists had signed NDAs and/or had relevant clearances (Puthoff and Davis come to mind).

In this article, I'm going to be discussing just two of the reports that were present in the list of studies. The relating scientist is Dr. Bruce Towe. His online biography states that he has a Ph.D. in bioengineering and has his work "supported" by groups like NASA and the National Institute of Health (NIH), among others. Part of his research for the NIH is within "emerging technologies" in neuroscience. His bio is present on the Arizona State University website. All very legitimate areas of research and experience.

The work of Dr. Towe was not elaborated in the originally available AATIP slides, but it doesn't require a huge stretch of the imagination to understand the source of his work and derive some of the relevant details by reviewing other aspects of his projects.

The two papers he wrote as “Technical Reports” in 2009 for AATIP were as follows:

At this stage it’s best to consider a few of the acronyms and terminology being used in the papers’ titles:

MEMS: Micro-Electromechanical System. So a small electrical and mechanical device.
Biosensor: this is an analytical device, used for the detection of a chemical substance, that combines a biological component with a physiochemical detector. In essence; a device that can measure the attributes and changes in the surrounding tissue.

If you want a reminder of how slide 8 looks from the AATIP presentation you can find his papers highlighted in the following image. The title of the papers are reported on the left side with the author labelled as “Towe” and the relating affiliation on the right side, which is reported as “Arizona”, so this is undoubtedly the same person referenced above. 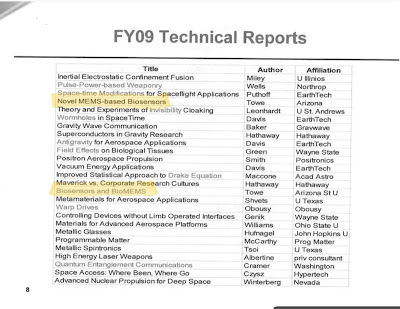 The next question we have to ask; why was The Pentagon paying for studies into micro-electrical devices as part of their UFO program? To answer this question we have to look into some other work that has been performed by a surgeon named Dr. Roger Leir and even dive into a film directed by Jeremy Corbell titled Patient Seventeen.

The Roger Leir Connection
In the 1990s surgeon Dr. Roger Leir had a patient arrive at his clinic that had claimed to be an "abductee" (i.e., a person that claims to have been abducted by aliens). Leir proceeded to perform x-rays on this person and found small objects embedded within their tissue, he'd later decided to extract the apparent foreign objects from the patient's body and perform an analysis of the material composition. Following an examination of the materials by the New Mexico Institute of Mining and Technology, the objects were found to be constructed of commonly found metals, but also surprisingly, had attributes of “meteors”.

In 2014 Dr. Leir wrote an article titled "The Smoking Gun" for X News Magazine where he claimed that there had been a long-standing "campaign of organized deceit" to discredit anyone that spoke of aliens and dismiss them as illusions. He went on to state that people are always looking for undeniable evidence of extraterrestrial interference with humanity and he felt that his work in removing objects from people's bodies was all the evidence the world needed.

As part of his research, he had listed the various aspects of the “implants” that were anomalous, they included; no scarring of surrounding tissue, nerve endings coming out of the objects, an “outer coating of ceramic-biological material” (which we’ll get back to later), emissions of radio-wave and electromagnetic radiation, and anomalous isotopic ratios of the metals’ composition.

Corbell's film Patient Seventeen elaborated on some of these aspects and demonstrated some of the more astounding elements; mainly the implant's emissions and the isotopic ratios. Shortly after the film was made and the article was written Dr. Leir, unfortunately, passed away at the age of 78. An image of one of the apparent implants can be found here: 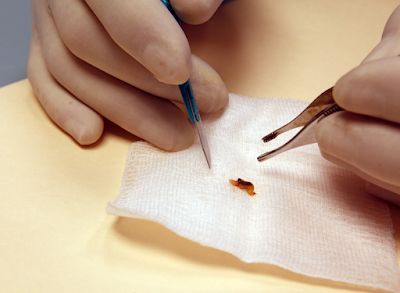 In this photograph, we can visibly see some of the observed attributes that Dr. Leir considered most significant. Importantly for this article, it shows the "outer coating of ceramic-biological material" that he'd written about. Contained within the "Smoking Gun" article were additional photographs showing what Leir called "carbon nanobundles" when viewing under an electron microscope. The work by Dr. Leir on these devices ended when he’d passed away in 2014.

Biosensors
As we move our awareness back over to Dr. Bruce Towe, we can start to see connections between his work and the work of Dr. Roger Leir. A quick Google search with both of their names only gives the results of a tweet that I’d made in September 2018 when I’d first noticed the two connections and shortly after the list of reports released as Defence Intelligence Research Documents (DIRDS) by George Knapp and published at KLAS. Bruce Towe was again mentioned within these DIRD reports with similar titles to those present within the leaked AATIP slides. Only this time one of the papers had a different name: 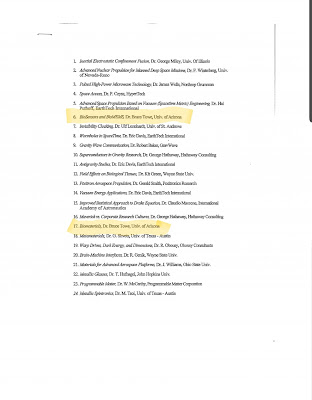 It's unclear whether the "Biomaterials" paper is the same as the "Novel MEMS-based Biosensors" one from the AATIP since the names between the two files are usually a close, but not exact, match. Regardless, neither of Dr. Towe’s papers are available to the public and are likely within some classified system within the US intelligence or military. Thankfully all of the authors of the papers have their specialist areas and have all written numerous relating projects on the same subjects. Checking through the scientific papers and patents listed with Bruce Towe as an author, we start to find some very interesting work and has exact correlations to the work of Dr. Leir. One of Dr. Towe's patents has the title:

There are two major components to the patent, as follows:

So an implanted device and a detector to read the information from the relating implant. The patent helpfully demonstrates aspects of the device in the following image: 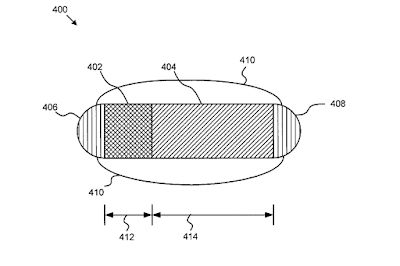 This shows the implant and the various elements; 410 is considered a “protective layer” to protect the biological tissue from toxicity, which is directly reminiscent of the apparent protective layer present in the extracted samples from Dr. Leir’s patients.  The device is also capable of emitting and receiving ultrasound frequencies as a method of two way communication with the detector device that would be outside of the body. Pictorial representation is shown here: 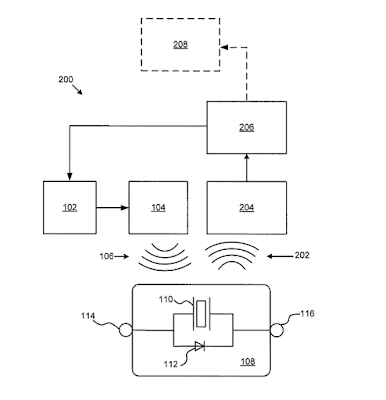 The detector is present at the top, with the Piezoelectric electric device at the bottom. You can see the communication between the two devices with the wavy lines and numbered 106 and 202. If we think back to the implants that Dr. Roger Leir was taking from his patients, he explicitly noted that there was radio-wave and electromagnetic radiation emitting from the devices that he’d found. These emissions were found to stop when the devices were extracted from the biological tissue.

Further on in the patent, it's stated that the devices themselves are capable of neurostimulation, which allows for stimulation of the patients' nervous systems for whatever purpose it was originally intended. This might tie back to some of the other AATIP slides where it's mentioned that the objects under study as able to "influence decision-makers" using a "cognitive human interface". It's possible that these implanted devices are able to perform that function. Although I suspect that a type of mind-to-mind contact is more likely and the implants may be able to influence via the release of chemicals; maybe even inducing sleep, trances, etc.

Now if we think back to those original reports or papers that the AATIP contracted out to Bruce Towe “Biosensors and BioMEMS”, there are correlations to his patent listed above. So his work for The Pentagon was related to a type of implanted device. We, unfortunately, have no further direct details on the study. Hopefully, it can eventually be released, though I suspect references to any other intelligences creating implants would likely not be present in the report.

One wonders if Dr. Leir’s work was ever referenced in the AATIP papers and if he was ever involved in the contracted study since it occurred in 2009, five years before his death. If I were to hazard a guess I would imagine the work of Dr. Towe is independent of Dr. Leir and likely includes no direct cross-references, since there would be a need to only indirectly refer to UFOs. Although you’d have to assume that AATIP at the very least were aware of the Roger Leir’s work on implants and the links are obvious. I recommend that others further explore the papers and patents by Dr. Towe to review the attributes and see whether there are other factors involved that tie to research in this area.

Conclusions
We have to be very careful when concluding on this data. I do not think we can assume that Dr. Roger Leir's extracted implants are in any way confirmed to be extraterrestrial, all we can confidently state is that he was able to identify anomalous material that was contained within his patients. Further analysis of those samples should be carried out by other professionals and other patients should be identified with similar types of objects within them. I'd personally like to a full analysis of the emissions detected from these materials and further isotopic analyses performed. Even then we cannot conclude that this is extraterrestrial since it's a huge stretch from unknown to ET. Especially if we have unrecognised attributes to physics, as stated in the original AATIP slides.

It is interesting is that The Pentagon's AATIP funded analyses into these implants, so they must have considered them worth pursuing. We need to determine how they decided to contract work out in an area like this. Was it because of the work performed by Dr. Leir or was there some other determining factor? I chose to include Dr. Leir's work here an explanation and the now obvious ties to Dr. Towe's work, only it's entirely possible that there is other more clandestine research into extracted devices within the US government and maybe these implants have been known about for some time.

No matter what our own opinions on anomalous implanted devices are, if they’re even implanted at all, it is clear that the US Government (at least one of their projects) considered them worth investigating and I only hope we’ll get to see the results of some of these studies in the near future, especially if they were able to determine the source and intent. 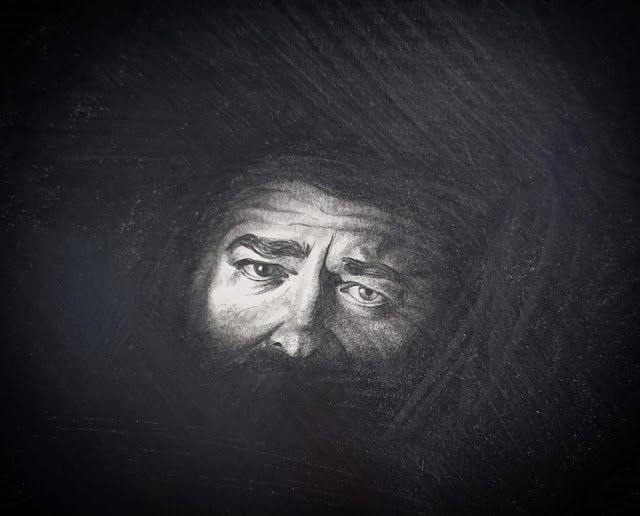